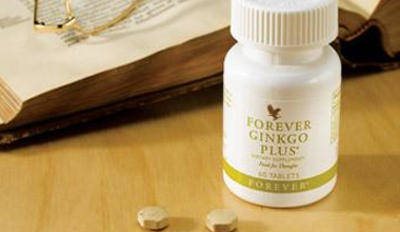 Feed your creativity with Ginkgo Biloba, the legendary “brain tonic” dating back five millennia. Forever Ginkgo Plus is a unique blend of four herbs. Ginkgo Biloba leaf extract, its chief ingredient, is combined with the powerful Chinese herbs of Ganoderma or Reishi mushrooms, Schisandra berries and cured Fo-ti.

The ginkgo tree is said to be the oldest surviving tree species. They live incredibly long (often over 1,000 years), and are extremely resistant to fungi and insects. Ginkgo Biloba is one of the most popular herbal supplements available in Europe and North America.

Extract from the ginkgo leaf yields flavonoids and terpenoids which can strengthen capillaries. They also act as antioxidants. Ginkgo has been shown to increase circulation of blood to the brain, making it a remarkable “brain tonic.”

Note: Ginkgo Plus is not recommended for use during pregnancy or lactation, nor for children under 6 years of age.

Looking to buy Forever Living's Forever Ginkgo Plus? Click on the banner to go to our official online shop.