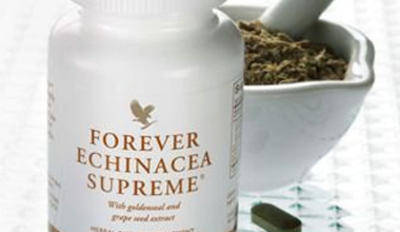 Echinacea has a rich tradition in the culture of the North American Plains Indians, who used it more than any other plant to help maintain their health during the winter time. They also applied root poultices, used Echinacea mouthwash, and drank the tea. It was prominent in America until the 1940s. The Europeans, who discovered it in the 1930s, still use it extensively.

Botanists named the plant after the hedgehog (Echinus) to describe its prickly, cone-like center. It grows naturally in the Midwest states from western Pennsylvania to Kansas and as far south as Northern Texas. Hundreds of scientific studies have indicated that Echinacea can help support immune function.

In recent years, research has discovered a mechanism by which Echinacea may help. One of the primary defense mechanisms of the body is made of a jelly-like substance called Hyaluronic Acid (HA). HA occurs in the tissues between cells to “cement” them together. There is an enzyme, hyaluronidase, which attacks HA in a way not fully understood. When it does, the HA quickly loses its jelly-like viscosity, and this protective “cement” loses its effectiveness. If the enzyme is allowed to destroy the integrity of the HA barrier, immune function may suffer.  Echinacea has been shown to prevent the enzyme from dissolving HA.

Looking to buy Forever Living's Forever Echinacea Supreme? Click on the banner to go to our official online shop.